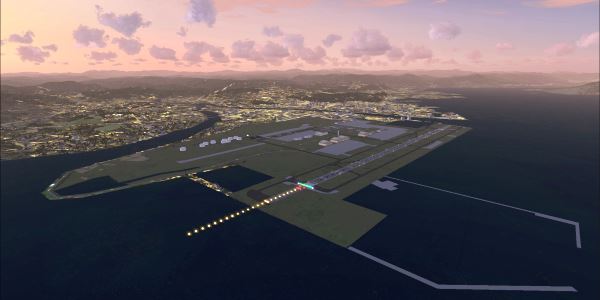 FSX – AFCAD For MCAS Iwakuni. This is not meant to be for the hardcore military simming types, as there are only a small number of parking spaces available. MCAS Iwakuni is used by a few contract airlines, to include OAI, National, and Atlas. Fedex and Delta will also make stops, albeit this is very rare. All Nippon flies in and out of Iwakuni several times per day, usually with an A320. The AFCAD includes the updated land extension, as well as the new runway. The tower view has been moved to the public access road, which is popular with local airport spotters. The physical tower has been updated to a newer, taller model, and the ANA terminal has been added. Cargo ramps have been added near the base terminal. Some of the maintenance hangars have been updated, to include the living spaces on North Side. The ILS frequency is updated, and moved to the new location to reflect the update. Autoland functionality has been tested with the PMDG NGX, and FSLabs A320. They both performed flawlessly.