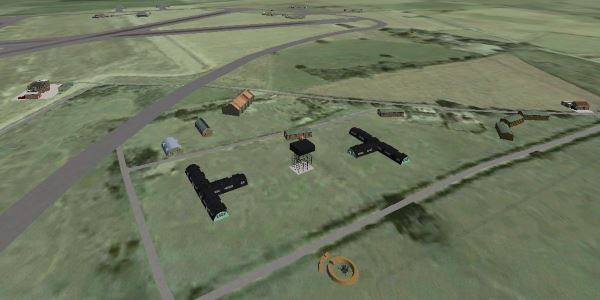 FSX – RAF Scorton located near the village of Scorton in North Yorkshire, England. RAF Scorton was opened in October 1939 as part of 13 Group Fighter Command and a satellite station of RAF Catterick. It was located near the village of Scorton in North Yorkshire. It was used by the Royal Air Force, the Royal Canadian Air Force, and the United States Army Air Forces Ninth Air Force during the war. The location was chosen for its flat terrain and its situation close to the now disbanded Eryholme-Richmond branch line that had a sub branch line to Catterick Garrison and RAF Catterick. The famous No. 56 Squadron RAF flew Spitfires from Scorton during the Second World War. Also the USAAF 422d and 425th Night Fighter Squadrons were stationed at Scorton flying the Northrup P-61 “Black Widow” fighter. The Aerodrome closed in 1945 and most of the concreted areas have been extensively quarried away for sand and gravel extraction. Most of what was the airfield is now under a lake or a quarry. There are a few military pre-fab buildings remaining in the area – they were dismantled after the war and moved to local farms to be used as agricultural buildings.