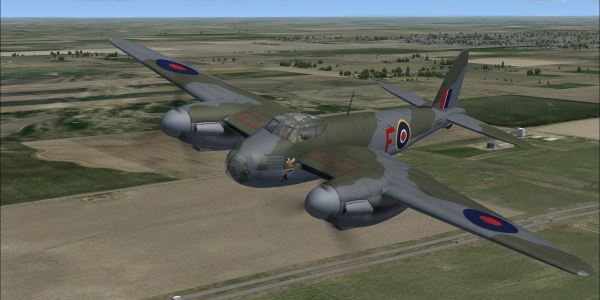 FSX – DeHavilland Mosquito BIV LR503. A repaint for the freeware DeHavilland Mosquito BIV for FSX from Dave Garwood at Classic British Flight Sim. LR503 was a de Havilland Mosquito B.Mk IX built at Hatfield in 1943. She was a veteran of 213 missions over Germany, last serving with No 105 Squadron.In May 1945 she was sent to Canada to display in support of the 8th Victory Loan Drive. Crewed by Flt/Lt J.M.W. Briggs and F/O J.C. Baker, the Mosquito put on a spectacular low level display on 9th May over downtown Calgary. This was to be repeated on the 10th May but tragically the aircraft struck metal poles on top of the Calgary control tower and crashed in a field, killing both crew members.