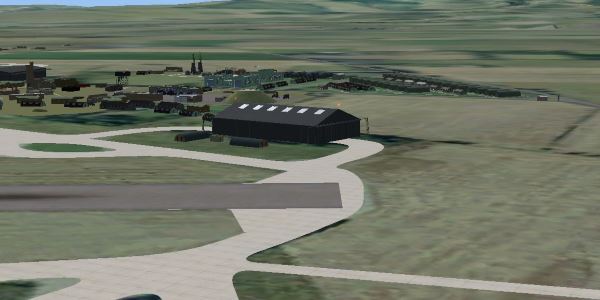 FSX – Royal Air Force Station Wombleton. Located 3.8 miles (6.1 km) east of Helmsley,  and 11.8 miles (19.0 km) north east of Easingwold, North Yorkshire, England. RAF Wombleton opened in 1943 as a sub-station of RAF Topcliffe. It was part of RAF Bomber Command’s No. 6 Group RCAF, and along with the main station at Topcliffe and the station at Dishforth, was designated part of No 61 (Training) Base. In November 1944, No 61 Base was transferred to No 7 (Training) Group and it was renumbered No 76 Training Base. No 1666 Heavy Conversion Unit (HCU) was the first unit to move to Wombleton. Aircrew who were originally trained on twin-engined aircraft such as Wellingtons or Whitley’s received conversion training on heavy four-engined bombers such as the Halifax or Lancaster. No 1666 HCU remained at Wombleton until the end of the war. The RAF took over the station and stayed for several years.