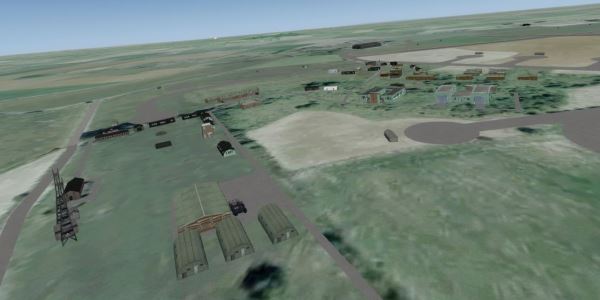 FSX – RAF Burn. RAF Burn is a former Royal Air Force station located 5.0 miles (8.0 km) south of Selby and 0.5 miles (0.80 km) east of Burn in North Yorkshire, England. The Station opened in 1942 before closing in 1946, it hosted No. 431 Squadron, Royal Canadian Air Force as part of 4 Group RAF Bomber Command which formed at the airfield on 13 November 1942 flying Vickers Wellington Mark X aircraft while at Burn. On 15 July 1943 the squadron was transferred to RAF Tholthorpe and became part of No. 6 Group RCAF. On 1 January 1944 No. 658 Squadron RAF moved to the airfield from RAF Clifton flying the Taylorcraft Auster III but left only seven days moving to RAF Doncaster but on 21 January 1944 the squadron returned, this time staying until 14 March 1944 when they moved to RAF Collyweston. The squadron was briefly joined on 31 December 1943 by 659 Squadron which moved to RAF Clifton the following day. During its use the airfield was also used by No. 10 Aircrew Holding Unit RAF. Shortly after flying was discontinued, the Royal Army Service Corps took over some facilities to store surplus equipment. ] Many of the buildings have been dismantled but all three runways remain intact and are used by Burn Gliding Club Ltd.