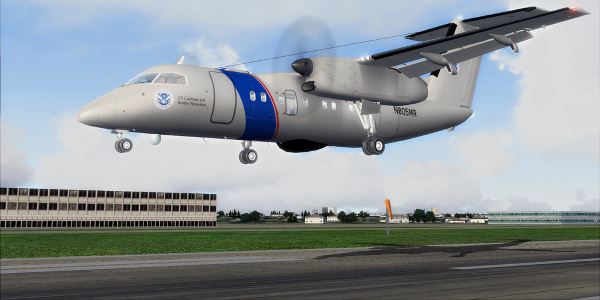 FSX – Bombardier Dash 8-100 And -200 Sound Set. This sound set is designed specifically for the Dreamwings Dash 8 and most likely will NOT sound as intended in any other aircraft. Unlike most turboprop sound sets, including the default ones, this sound package features propeller sounds that play according to prop RPM, rather than turbine RPM. This provides a much more realistic turboprop sound experience. For example, during final approach, when the props are set to max RPM but the engine power is set lower, you will hear the high prop RPM. As another example, while desceding at, say, flight idle, the constant speed propellers continue to turn at their set speed (e.g. 900 RPM), and you will hear the propellers at this speed even though the power levers are at flight idle. In most turboprop sound sets, you would instead hear a sound that corresponds to idle prop RPM. This sound set does not use pre-recorded startup sounds. Instead, the propeller sounds are programmed to play even at very low RPM. As the engine starts and prop RPM increases in the sim, the sounds will change. Then, as the propellers are unfeathered, the sound will change again. In addition to the propeller sounds, a quiet turbine whine is also included.