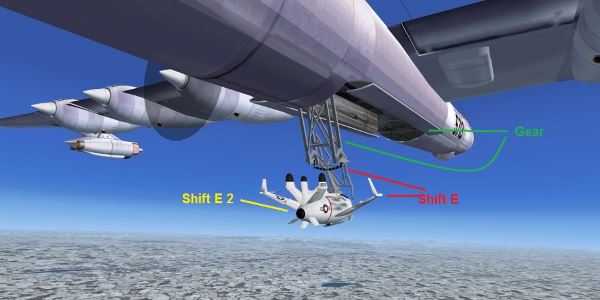 FSX/FS2004 – Curtiss B-36 Bomber With Parasite Fighter XF-85. This package honours Kazunori Ito’s great work and the incredible US concept of equipping a long range bomber with a tiny inceptor within the bombbay. The fighter, hanging on a trapez, was swang out from the bombay and after it was released it should defend the bomber far from the home base. After the fight it was proposed that the fighter returns to the bomber, connecting its hook onto the trapez. This concept was successfully tested with a B-29 but was never done with a B-36. The package contains three models: A) Kazunori Ito’s  original B-36 with a static XF-85 within the bombbay with animated gun turrets and bombbay. B) Erwin Welker’s reworked model of Ito’s B-36 with the animation of the XF-85 coming out from the bombbay and flying away. This version is just for flying because of avoiding exceeding the vertices limit of the simulator inside parts of the B-36 (gear,gun turrets and crew) are removed. This version has a VC. C)Kazunori Ito’s XF-85, upgradet for FSX by Michael Pook. All original models are made by Kazunori Ito, model rework of the B-36 with the XF-85 animations and all camera definitions by Erwin Welker, all panel rework with FSX-compatible gauges by Michael Pook. Gauges by different authors.