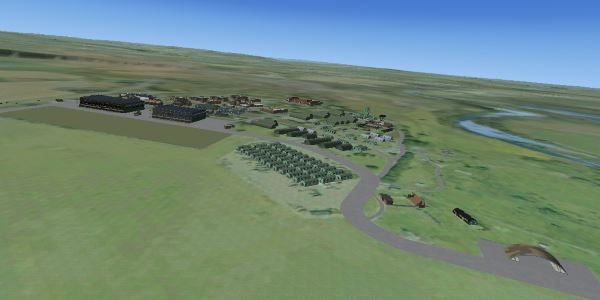 FSX – RAF Catterick, is a former Royal Air Force airfield located near Catterick, North Yorkshire in England. RAF Catterick is located alongside the A1 on the outskirts of Catterick Village. Operationally it falls under the command of Catterick Garrison. It currently houses 5th Regiment Royal Artillery and 32 Engineer Regiment. Catterick airfield first opened in 1914 as a Royal Flying Corps aerodrome with the role of training pilots and to assist in the defence of the North East of England. It came under RAF administration in 1918 and housed Number 49 Training Depot. In 1927, it temporarily came under the administration of the British Army, under the Army Air Co-Operation Command which would supply the army with any air support needs that would be required. This continued until 1939 when the station was handed back to the RAF. During the Second World War, the airfield operated a small satellite station called RAF Scorton near the village of Scorton. Catterick’s runway could not be extended from its existing 3,350 ft (1,020 m) for the jet age due to the perimeter being bounded by the Great North Road (A1) and the River Swale. Therefore, Catterick’s importance declined after the Second World War, though it still housed training institutes for many years.