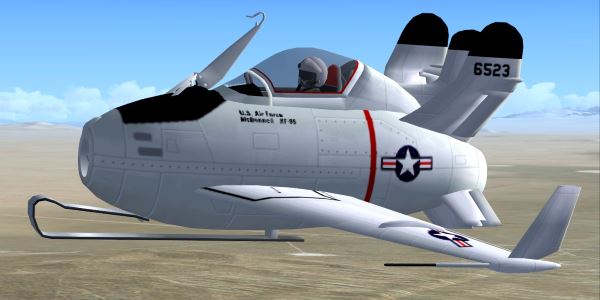 FSX – McDonnell XF-85 Goblin Update. The McDonnell XF-85 Goblin parasite aircraft was developed to protect B-36 bombers flying beyond the range of conventional escort fighters. In theory, a B-36 penetrating enemy territory would carry its protecting fighter in the bomb bay. If attacked by enemy aircraft, the bomber would lower the Goblin on a trapeze and release it to combat the attackers. After the enemy had been driven away, the parasite fighter would return to the bomber, hook onto the trapeze, fold its wings, and be lifted back into the bomb bay. Although the XF-85 was successfully launched and retrieved from an EB-29B on several test flights but was never flown from a B-36. The test program was canceled in late 1949s when mid-air refueling of fighter aircraft for range extension began to show greater promise. This is and FSX Update of the XF-85 by Kazunori Ito. It features a new static VC and a 2D panel with now FSX compatible gauges. I also added lights including VC light as well as smoke effect and slightly changed the flight dynamics.

Original model by Kazunori Ito, all updates and static VC by Michael Pook