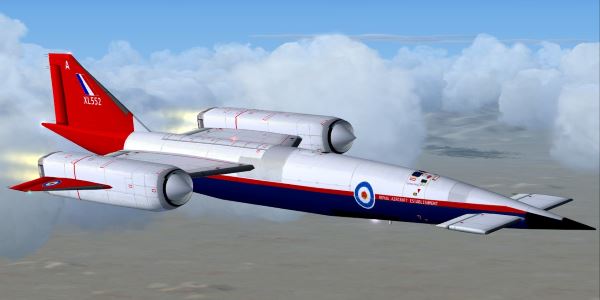 FSX – Avro Vigilant 730 Updated. The Avro 730 was a planned Mach 3 reconnaissance aircraft and strategic bomber for the Royal Air Force. If it had proceeded into service, the aircraft would have replaced the V bombers as the primary nuclear weapons delivery system for Britain’s nuclear deterrent. It was cancelled in 1957 along with other development on manned aircraft as part of the 1957 Defence White Paper. This package is an FSX Acceleration update for the Avro Vigilant 730, originally designed by Kazunori Ito for FS2004. It features the default texture by Ito as well as three excellent ones by an unknown designer. It corrects some issues of an earliar FSX update from 2011 (which included the three new textures) like faulty contact points and FSX incompatible gauges and features slight enhancements for the VC and 2D panel. Credits go to Kazunori Ito for the terrific original model and to the nameless texture designer.

All updates by Michael Pook