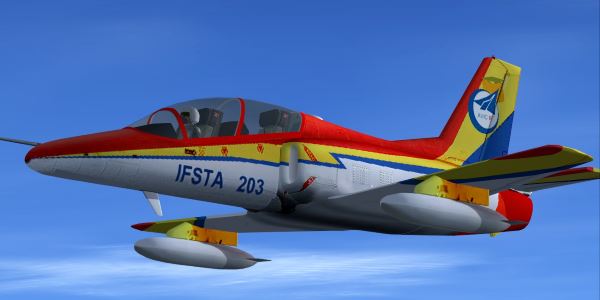 FSX – Hongdu JL-8. The Hongdu JL-8 (Nanchang JL-8), also known as the Karakorum-8 or K-8 for short, is a two-seat intermediate jet trainer and light attack aircraft designed in the People’s Republic of China by China Nanchang Aircraft Manufacturing Corporation. Its export variant, K-8 Karakorum is co-produced by the Pakistan Aeronautical Complex for the Pakistan Air Force. This package is primarily a panel update of the VC and the 2D panel to make it flyable in FSX. It features seven great liveries, new smoke effect and slightly altered FDE for easier take-off. The model was designed by Pierre Marchadier and the textures by Jonathan Hilaire “Rooster”. Original upload for FS2004 by Ramex, so all credits and thanks go to them. Also thanks to Philippe Wallaert for some of his gauges.