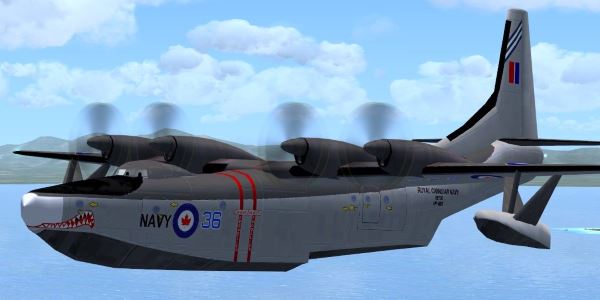 FSX – Convair Tradewind R3Y Update. The R3Y was powered by 4 turboprop engines driving counter-rotating propellers. It flew first in 1954. It was originally designed as a patrol bomber and was designated XP5Y. Later, the Navy decided it should be used to haul personnel and cargo and was designated R3Y-1. This mega package is a panel and slight interior update for the terrific R3Y designed for FSX by Paul Clawson. It features the default livery by Paul Clawson as well as seven beautiful liveries by Lazarus Starkweather. The focus of this update lies on an entirely new VC design and a new 2D panel (the original package didn’t have one) matching the VC as closely as possible. The FDE has been optimized, so now the aircraft gets airborne in decent time. New smoke effect adds to a more realistic appearance of the model. Most of the gauges have been adapted from the Boeing XC-105 bomber by Georg Diemer. All credits go to Paul Clawson, Lazarus Starkweather and Georg Diemer for the great original model, the additional liveries and the gauges.