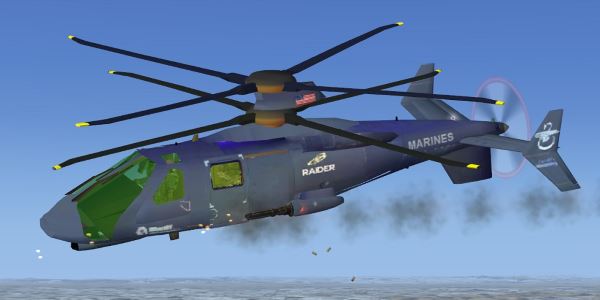 FSX – Concept Helicopter Sicorsky S-97 Raider. It is Sikorsky’s proposed high-speed scout and attack compound helicopter which can carry 2&6 men as crew plus armed soldiers. Cruising speed is 253 mph/407 kmh. It is Sikorsky’s earliest attempt for a fast helicopter with stiff coaxial rotors and is buildt in 2 different styles of prototyp. The first flight was in May 2015. The FS-model has a VC with animated sticks and HUD. The exterior provides animated multible rockets and a fast rotating gatling gun. Twelve cameras shows all the features.

FSDS 3.5 model and panel and all configurations by Erwin Welker